In the Twentieth Anniversary edition of Textual Poachers: Television Fans and Participatory Culture, Henry Jenkins reflects on the positioning of fan scholars and scholar fans, or what he eventually comes to term, “acu-fans,” a compound of the words “academic” and “fan” (viii). He notes that “the autobiographical turn had long been a part of the cultural studies tradition” (iv) and been absorbed into fan studies. As Suzanne Scott (who interviewed Jenkins for the twenty year retrospective included in this edition of the text) observes “it’s now common practice for fan scholars to disclose their investment in the texts and interpretative communities they study” (viii).

Jenkins’ certainly anticipated this trend in 1992 when he first published Textual Poachers. In his introduction, he acknowledges and negotiates his dual identity as fan and scholar: “When I write about fan culture, then, I write as both an academic (who has access to certain theories of popular culture, certain bodies of critical and ethnographic literature) and as a fan (who has access to the particular knowledge and traditions of that community). My account exists in a constant movement between these two levels of understanding which are not necessarily in conflict but are also not necessarily in perfect alignment” (5). It is in this spirit, then, that I want to focus this introductory blog by outlining my background and positions within fan and academic communities.

From my earliest interactions with stories, I have been draw to fannish practices. Growing up, if there was a book or television show that I loved, I didn’t want it to end when the covers closed or the TV went dark. Instead, I found ways to expand those stories, to incorporate them into my life. My brother, friends, and I would play in Narnia (though every closet door and painting in my home proved a disappointment and I never found a way to enter that magical place, save through my imagination), spinning new and elaborate narratives in the world that C.S. Lewis had created. Sometimes we would take on the roles of the Pevensie children; others we would invent new character to populate the fictional world. Sometimes there were costumes involved. Sometimes we would write down the new stories we had crafted through our play.

As I grew older, we moved from Narnia to Florin to Middle Earth to The Goblin Kingdom, and the stories grew more complicated, the boundaries of these realms sometimes porous and nebulous so that characters from one would appear in another.

And eventually, as all children do, I stopped playing out these stories. But I’d didn’t stop writing them down.

I now recognize that many of the impulses that drove me as a child continue to inspire my fandom. In drawing this connection, I do not mean to infantilize fans, including myself, by presenting them as puerile, but rather to show that the impulse toward fannish activities has always been a part of how I consume the stories I love. Those stories capture me, or I capture them, and I don’t want to let them go. I want to know more about the world in which they take place, the characters that populate them, their histories and futures. Some might consider my relation to these texts as bordering on obsession, but I, taking a cue from Jenkins, prefer to think about it as active, critical engagement. My consumption of these texts is not passive but productive.

The first fanfiction I posted online was about Buffy the Vampire Slayer. I was earning a MA from Fordham University, and I was at a point where I felt very isolated and alone. I had recently fallen into the Buffy fandom, endlessly rewatching Buffy’s seven seasons and its spinoff’s, Angel, five. But I wanted more. At first, I lurked around some fanfiction sites, reading stories but not engaging with the community. This experience mirrors that of most fans’, who spend time learning the conventions of a fan community before actively participating. Eventually, I set up an account and commented on the stories I was reading. It didn’t take long for me to post the stories I had penned during my breaks from coursework and find my place within that community of writers and fans.

I still remain a member of the Buffy fan community, though recently I haven’t had the time to write or post much fanfiction (grad school will do that to you). Like most fans, I have moved in and out of fandoms, becoming active in some, like The Walking Dead and Game of Thrones, lurking at the peripheries of others, like Sherlock and Supernatural.

While I was discovering fan communities, I was also figuring out my place in the academic world. I had entered my MA program at Fordham with a focus on post-war American literature, and feminist and postcolonial studies. But, at the same time that I was fangirling about Buffy, I also learned that I could write critically and academically about the show. My first published article was about the ways in which Buffy rearticulates colonial discourses, and I my first conference presentation was at Slayage, an international conference focusing on the works of Joss Whedon, Buffy’s creator. In the Whedon Studies Association, I found a group of scholars, who, like me, were also fans, who could critique the works while still loving them, who could point out their creator’s flaws and shortcomings while still enjoying what he had created. I had found my people.

While I continue publish and present on Buffy, my focus, in recent years, has shifted to fan studies. In this work, the Venn diagram of my academic and fannish lives intersects and I, like Jenkins, use one to inform the other. I see this as a continuation or evolution of my work on Buffy the Vampire Slayer. I wrote on Buffy because I was fan; fandom was my entry into the text. Now, to some extent, my fandom is the text, or at least where the text begins. 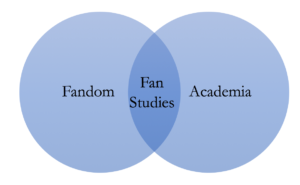 As a second-year PhD student at Stony Brook University, I plan to explore the reading and writing practices of fan communities, drawing from reader response theory, cognitive studies, and rhetoric. This blog is accompanying an independent study on fanfiction, where I plan to post my thoughts on the scholarly and fannish texts that I will read throughout the semester.

This site is part of Humanities Commons. Explore other sites on this network or register to build your own.
Terms of ServicePrivacy PolicyGuidelines for Participation
Skip to toolbar